Have you been looking for a 1961 Corvette tachometer, but everything you can find that’s allegedly from “1961” is actually from 1960? Does it seem like no matter where you go, no one has the exact Corvette parts that you’re looking for? We absolutely understand. Indeed, that’s part of the reason we started CS of MD West in the first place. Here, we wanted to establish a place that was by and for Corvette owners, real Corvette enthusiasts. At our site, we offer many different kinds of Corvette tachometers.

As of this writing, we offer a tachometer at our site for that’s from late 1960 through early 1961. If you have a Corvette from that time period with a 270 HP engine, this is the tachometer for you. Electronic, this is a new reproduction high RPM tachometer assembly. It has a 6500 redline, and we can make it operable with LS engines, too. Should you have a Resto-mod, or some other kind of car that doesn’t have a tach drive generator or distributor, we’ve got you covered. 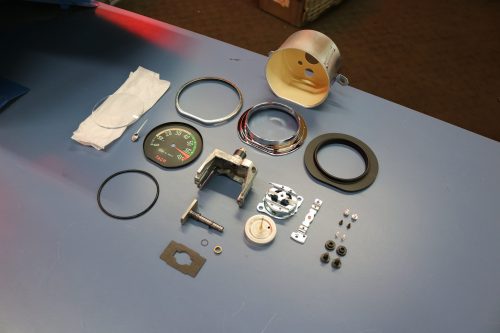 Corvette Tachometers from Late 1961, Too

“Late 1960 through early 1961” is one time, but “late 1961” is another. For people who are genuinely serious about their Corvettes, the time period almost sixty years ago is critically important. That’s why we also make brand new tachometer assemblies that fit late 1961 Corvettes, too. As with all of our reproduction parts, this tachometer has been painstakingly reproduced in exact detail. How do we do that? Individual part by individual part. The truth is that, yes, these tachometers are made of small parts. However, we don’t believe that there is any part that is “too small” to be properly reproduced. These tachometers will work in the manner you want them to today as well as tomorrow.

The Problems With Some Used Parts

In many cases, used parts are a great fit. The problem with used parts is that they could have been used too much. Even the best maintained, the most “kept-up” used part will have seen some wear and tear over the course of the last so many decades. So, that means that they’ll stop working at a level that you would prefer sooner than a reproduction part would. We understand if your decision was limited to “used part” and “mediocre reproduction part.” However, since we offer top notch reproductions, that are exactly the same as the original parts, you can save time, money, and more when you go with a reproduction part.

While this blog has covered mostly tachometers for Corvettes from the year of 1961, the truth is that we have tachometers for all manner of classic Corvette. In fact, at our facility, we can repair, rebuild, and restore any classic Corvette tachometer from the years of 1953 through 1974. Tachometers are a major focus of our company, but they’re far from the only kind of Corvette parts we offer. To see all that we have or talk to a pro, check out our site or call (800) 638-6450.