Just about every feature of the classic Corvette is iconic. From the exterior to the wheels to the dash – a Corvette is as much style as it is substance, as great as the sum of its parts. For your Corvette to be everything that you want it to be, everything has to be right. If you’re like so many of us with classic Corvettes, when something is just a little bit off or less than optimal, it bothers you. Sure, it may not bother those that see your Corvette or ride in it (they won’t notice) but you will. For the true Corvette enthusiast, we offer our 1961 Corvette tachometer, as well as many other products.

Throughout the 50s and 60s, Corvettes changed quite a bit. Indeed, they even changed within a given year. For example, Corvette tachometers with solid lifter fuel injected engines were calibrated to be run by the distributor. We offer a Corvette tachometer that is correct for late 1960 through early 1961 Corvettes, specifically those with 290 HP engines. So, if your Corvette comes from that particular time, this is the right tachometer for you. 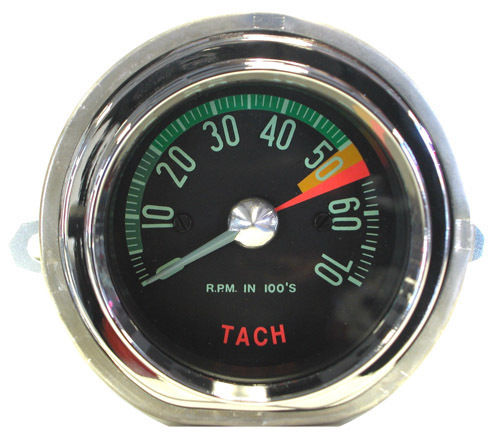 Original Delco and Original Reproduction, Working as One

Every tachometer we offer is unique. However, they’re also better than a used part. For example, this tachometer that’s right for Corvettes from late 1960 through early 1961 has many parts in it that are made from the original Delco tooling. For the rest, however, instead of cannibalizing some old part or something similar, we reproduced them in exact detail. Through a painstaking process, we built these new components right in our shop. That means that they’ve been constructed out of the best of modern technology and components. So, in every sense of the word, this is a “new” tachometer. However, it’s a perfect fit for an incredible car from the past.

The Benefits of a New Reproduction Over a Used Part

A used part is just that: used. While there are many great used parts out there, the truth is, when it comes to something like a tachometer from 1961, it’s been in use for more than fifty, almost sixty years. Even the best-made car parts imaginable would struggle to be able to continually work for more than half a century. Our reproduction tachometers and other parts are as faithful as can be, providing all of the benefits of the past in modern trappings.

We don’t want you to think that we only offer tachometers from “early” 1961. No, we also have tachometers such as our 1961 Late Lo RPM Tachometer. Unlike the early model, this one was calibrated to be driven by the generator. That means it’s a perfect fit for Corvettes that have a 230 and 245 HP engine only. We understand that, as much as you may love and revere your Corvette, you may be unsure as to which tachometer is right for you. We’re more than happy to answer that or any other questions at (800) 638-6450.