If you’ve been reading these blogs for any length of time, then you know that we tend to take Corvettes pretty seriously around here. Our C2 Corvette restoration parts are meant to be exactly that: a “restoration.” The word “restoration” has many definitions, all of which fit these parts. For example, “restoration” means “the act of restoring; renewal, revival, or reestablishment.” These parts certainly do that for your C2 Corvette. Another definition of restoration is “restitution of something taken away or lost.” That’s something else that these parts can do, too. 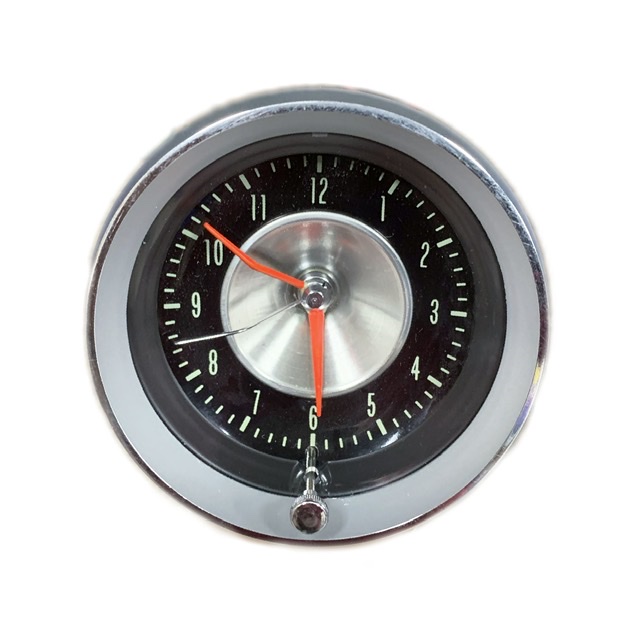 The last definition mentioning “restitution for something lost” certainly fits with plenty of our restoration parts. A great example of this is our 1963 Corvette Restored Parking Brake Switch. We restored this part to show quality. Not “sit in your garage quality” or “go out on the highway” quality – we made this part so that you can proudly take it to a show and be competitive among other Corvettes. In fact, this particular parking brake switch is quite difficult to find (which you know if you’ve been trying to find it online). Many of these parts were discontinued at one time or another. This part, however, was discontinued in April 1973, more than 46 years ago. After almost half a century, this part is back.

Everything about our restored clocks are meant to be as much like the originals as possible. They’re meant to not just “pass” as the original parts, they’re made to be “the same” as the original parts. For example, our 1963 Corvette restored clock looks just like the clock did in early 1963. How much so? If you look carefully at it (like really, truly, carefully at it) then you’ll see that the hour hand is longer than the revised design used after early production. That’s not an accident: that’s how the early 1963 clock looked. When we restored it, however, we did a lot more than just make sure the hands were the right size. Indeed, we restored this clock with a standard, mechanical movement, too. You might be saying: “I have a 1963 clock, I don’t need a new one.” Of course you don’t! We’re more than happy to restore the clock you already have.

The Parts You Can’t See

Nothing looks better than a Corvette. There’s a reason that practically every so-called hot rod since has tried to take something from the Corvette look. Of course, as we all know, there’s so much more to a Corvette than just the outside. The parts of the Corvette that aren’t exactly visible are a major part of the Corvette as well. That’s why we offer parts like the 1964-1971 Transistor Ignition Electronic Module. Originally introduced in 1964, we’ve found a way to use today’s, modern, cutting edge technology to bring the system up to its full potential. We made sure to use one of GM’s former top electronics experts, to make it that much more authentic. For more great Corvette parts, call (760) 568-6450.