Corvette tachometers used in the model years 1963 and 1964 present some troublesome issues. We would like to address them for those that may have an interest.

The radical design changes that began in the 1963 C2 Corvette did not limit to body and suspension. The gauges also differed greatly from what had become familiar in the 1953-1962 C1 Corvette production run.

The speedometer and tachometer became larger and more prominent in the dash cluster. The radical design change focused on the beautiful large silver cones in the center of all of the gauges. (the 1963 gauge set is my personal favorite.) In 1964, the bright center cone was replaced with a semi flat black cone with concentric rings. This would reduce glare associated with the 1963 cones. The pointers centered in the depth of the cone and made a bend to lay parallel to the gauge face.

Attachment for the traditional AC series “W” speedometer and tachometer mechanisms to the dial faces differed from C1 units. Dials or faces used in  1953-1962, and 1965 -1977  Corvette speedometer and tachometer  were stamped steel.  Machine screws attached the dials from the front.  The 1963 and 1964 dials were die cast. They attached with tapping screws in the rear.

The 1963 and 1964 tachometer and speedometer faces seldom require our refacing. Die cast dials did not rust and degrade like the earlier and later stamped steel faces. We are able to restore most faces very well. We do rescreen the yellow/redlines as they always seem to be faded.  Low redline face below, was original. We  re-screened the yellow/redline. We completely refaced (rescreened) the High redline face below. Low redline face with black center has no cone in place.

Both 1963 and 1964 faces were the same with the exception of the center cone. The cones can be changed, when performed properly! 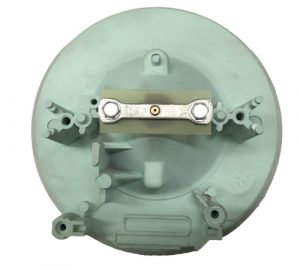 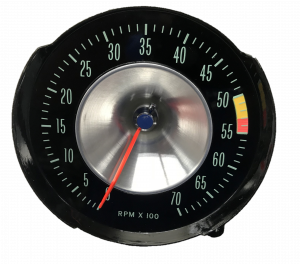 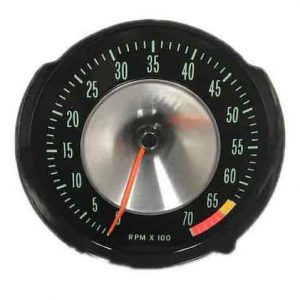 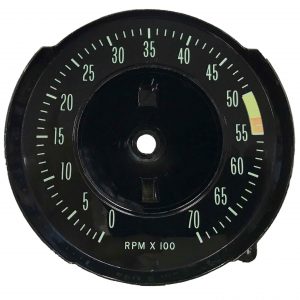 The depth of the cones caused the proximity of the dial to become very close to the field plate. 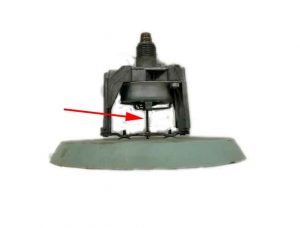 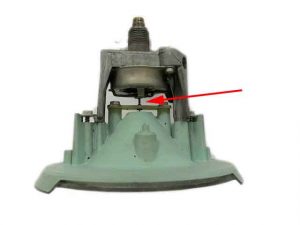 AC used a different speed cup with a much shorter shaft to compensate for this change.  AC serviced these speed cups into the early 1990’s. We purchased many hundreds of these through the years. The service part, #6406502 worked fine in the speedometer. Tachometer usage of the service part speed cup required a change from the original magnet.

This is where it became complicated! Pointers used in 1963 and 1964 were very heavy.  In a future post, we will address the physics aspect of these units but for now, let’s just say gravity comes to play. As the pointer rises from zero, gravity wants to keep it low. A tachometer will climb much faster than a speedometer, and to have it rise and fall with accuracy, AC specified the use of a heavier spring on the speed cup.   In order to push that heavy pointer against a heavier spring, the magnet needed to have more strength. We introduce the AC PART number 1580798 magnet. Also known as a gold or to be technically correct, high cobalt magnet. 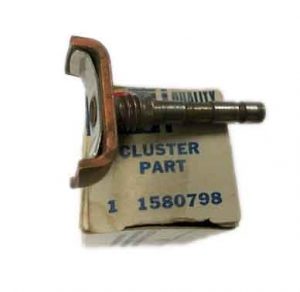 In order to properly rebuild, and restore a 1963 or 1964 Corvette tachometer, the use of the high cobalt magnet and the proper speed cup are necessary.

Can the 1963-1964 Corvette Tachometer receive a rebuild with a service part speed cup and regular magnet? Yes. Will it operate as intended? No. Why you ask? The pointer will not be as responsive to the sudden changes in RPM.

At Corvette Specialties of MD West, we have a large inventory of used, and NOS parts to properly restore your Corvette instruments.

As these units wore with time and mileage, that heavy pointer would often snap off at the speed cup, or just wind itself around and snap at the hub. At one time they were impossible to find. This resulted in the introduction of a reproduction part. Cosmetically, the new pointer was great. That is where “great” stopped . Calibration was nearly impossible with these new pointers. They tended to read low on the low end,  and high as RPMs climbed above 3000.  They did not have a proper balance. Yes a pointer has a balance weight. (note,we removed the plastic cone to show the pointer hub) 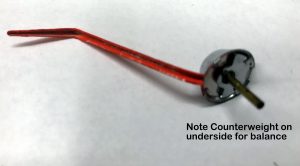 We used to place a blob of solder in the back of the “tail”, in order to achieve calibration. Fortunately, we were able to locate an alternate supplier, finding a new pointer that would calibrate properly.

Most Tachometers that we receive retain that gold high cobalt magnet. We are often able to reuse the original magnets.  Some received a service previously and will not disassemble without breaking at the flare. Magnets are sometimes worn or scored from lack of grease.  In cases where we are able to reuse the magnet, we install a new jewel using the proper Circle Ess (Stewart Warner) jewel replacement tool. (pictured below) 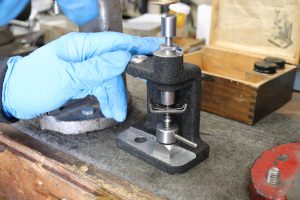 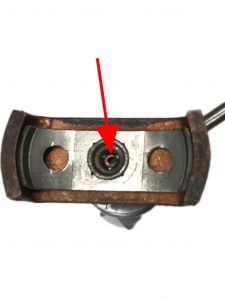 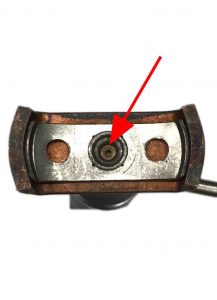 This tool is nearly impossible to find. Manufactured specifically for this jewel replacement. We have two of these tools! (None for sale). The jewel replacement is critical. A worn jewel, (see pictures above) results in a noticeable “wobble”at the pointer hub. The magnet jewel acts as a lower bushing, or stabilizer for the pointer.

In the case of a  broken original tachometer speed cup we will either have good originals or carefully remove  the hair spring from a broken speed cup and install on a reproduction part.  The replacements do not have the proper spring to calibrate with the original gold magnet.

So, we have covered the mechanism used in 1963 and 1964 Corvette Tachometers. Now let’s address that dreaded early 1963 Buzzer or Alarm tachometer. Original AC part number 6411011.

What was this about you ask? Chevrolet decides that there should be a warning buzzer.

This small buzzer would activate at the 6500 RPM redline. And this would alert the driver to shift to a higher gear.

Right, this small buzzer would alert the driver with all of the testosterone and adrenaline raging, at 6500 RPM? Not likely! This was a flawed design and prone to failure. Buzzer tachometers continued to be installed in dash clusters (assume until supplies were exhausted?) without the buzzer or harness. 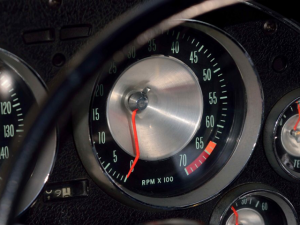 A circuit board was used to allow a small ribbon that was attached to the back of the speed cup as a “sweep”. The ribbon was positioned to contact and complete the ground circuit at 6500 RPMs . The pin at the back of the board necessitated an additional small hole in the speedometer and tachometer backplate. 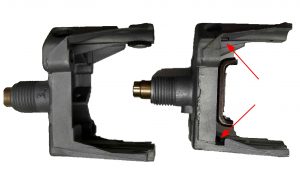 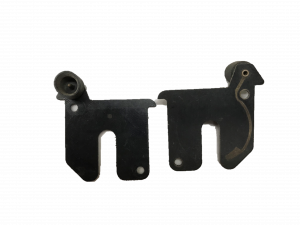 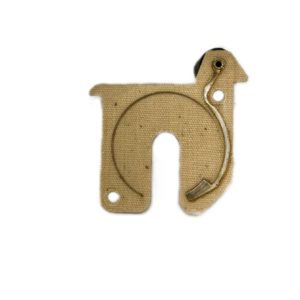 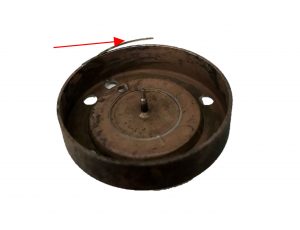 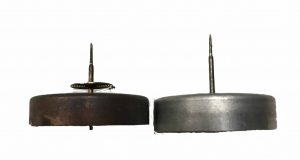 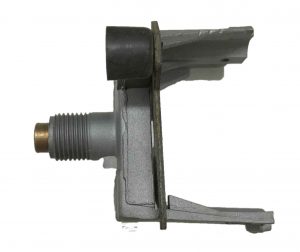 Buzzer Tach Frame with circuit board in place. 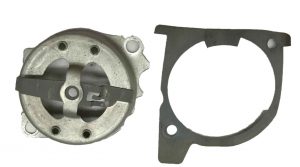 Tachometer Field plate. Gasket on right is only used with buzzer tachometer. 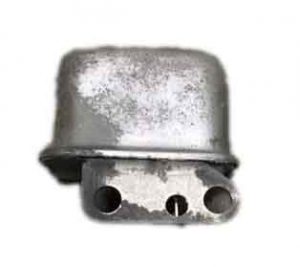 A wire connected to the pin, and attached to the buzzer located on the dash reinforcement bar. When the pointer reached redline, buzzer became activated by the grounded circuit.

We have rebuilt many of these units through the years, and we insure they are fully operational before they are returned to the customer.

As a side note, I doubt that any judging event would require the function to be tested. Who wants to twist that Fuel Injected 1963 Corvette to 6500 RPM and have a judge listen for a buzzer? Let’s face it, most of is in this hobby have noticed a bit of hearing loss haven’t we?

Upon request, we can take a video showing customer the function of their buzzer tachometer.

Corvette Specialties of MD West can handle all of your Corvette instrument needs. We have the knowledge, experience, spare parts and necessary equipment to do the job right!

Thank you for stopping by and reading this post!

Click here to read about our Tachometer Restoration Services

Click here to read about our Speedometer Restoration Services